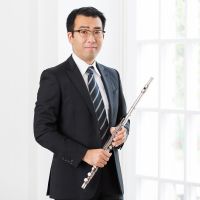 Born in 1971 in Tokyo, Japan, Masahiro Sekine took flute lessons with Kazuhiko Sekine and Hiroshi Koizumi and subsequently studied at the Tokyo College of Music under Professor Yasukazu Uemura as well as at the Hochschule für Musik "Hanns Eisler" with Professor Werner Tast. He was a finalist in the "All Japan Solists Contests" and prize winner of the "Hanns Eisler Prize" for composition and interpretation of contemporary music in Berlin. He has taught at the Joseph Schmidt Musikschule Treptow-Köpenick in Berlin since 2000, is involved as a flautist within the chamber music discipline both at home and abroad and is regularly active as a lecturer in seminars and Master’s courses in France and Japan.